Play this Kong slot for free by pressing Spin. 20 paylines and exciting bonus rounds await for you on this bigger than life game. 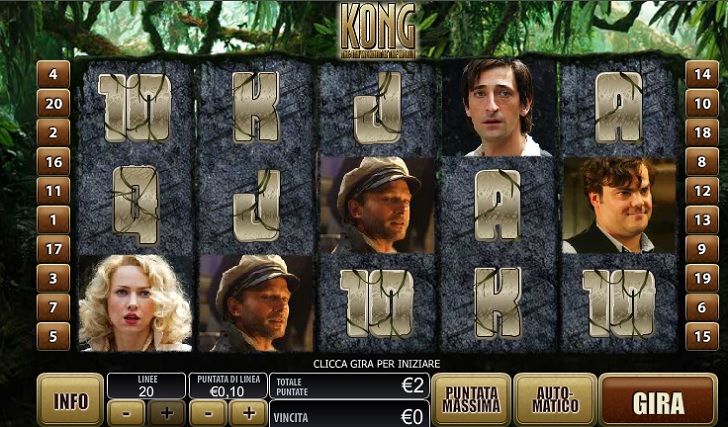 Kong is an online slot that was developed by Playtech and is based on the 2005 hit movie King Kong that was directed by Peter Jackson and starred Naomi Watts, Jack Black, Adrien Brody, and Andy Serkis.

This 5 reel, 20 payline slot really encapsulates the atmosphere of this film with Skull Island's habitat used as the background to the slot and a wealth of the movie's characters such as Ann Darrow, Carl Denham, Jack Driscoll, and Captain Englehorn appearing on the reels.

The Wild symbol is Kong himself. It has the power to substitute for all symbols on the reels, except for the Scatters, to complete any potential winning combinations that might appear on any single spin.

Scatters are also present on the reels. These are displayed in the form of the King Kong logo. The power of the Scatters also depends on which game mode is being used by the players at the time they appear on the reels.

The slot is split into two different game modes. The Jungle Mode and Big City Mode.

In Jungle Mode, it is possible to trigger the Wild Jungle Re-Spins and the Skull Island bonus features.

Three or more Wilds will trigger the Wild Jungle Re-Spins bonus feature. Once activated, players are awarded 3 re-spins. Every Wild that appears on the reels during each re-spin will remain frozen in that position for the remainder of the re-spins. The Skull Island bonus feature cannot be triggered during this feature and this feature can also not be re-triggered.

The Skull Island bonus feature is the other bonus game that can be triggered during Jungle Mode. Players will need to hit three or more Scatters across the reels to activate this bonus feature. Once triggered, players will be presented with a map of Skull Island. Players must select locations on the map to reveal one of a number of creatures. They must then match the creatures to win prizes. However, if players reveal a single Kong then that will trigger the biggest prize. Once this bonus feature it completed, players will be taken to the Big City Mode.

The City Tower Bonus is triggered by players hitting three or more Scatters across the reels in Big City Mode. Players are taken to a second screen where Kong is under attack in the iconic scene on top of the Empire State Building. Players will be faced with three waves of attacks from three planes. Players must then pick one of the planes in each attack to reveal a prize. Once this bonus feature has finished, players will be taken to Jungle Mode.

Kong stays very true to its movie roots and it is a thoroughly enjoyable slot. It has all the images and cut scenes from the movie thanks to Playtech's licensing deal with Universal Studios and this ensures that players get an authentic experience. The two game modes also give the slot a lot of depth and the two different re-spin modes are particularly thrilling. Everybody also loves an interactive bonus feature and this title also delivers on that front with the City Tower bonus feature.